It has been seven years from my first pregnancy. Now I am reflecting back on the whole thing as I am sipping a cup of good coffee while trying to forget about  my lower back pain. In the back of my mind, I murmur, how unthoughtful of me to have done yoga three days after giving birth. The back pain started with my last birth. It has been a strange way of keeping track of time. This is how I understand chronology: by mapping an incident on the timeline of my pregnancies and births number one, two, and three.

Blessings I was started in 2010 when my first child turned one. (I resist to say I was a passionate young woman then.) I had my work chosen in a group exhibition titled Women: Relationship and Identity and I brought my  baby and nursed her in the back room during the opening. At the discussion session among the invited artists and the curator, I proudly said “Isn’t it about your choice? You can be both a successful artist and mother; we can choose to have only one child, for example, right?”

And I really meant what I said. Five weeks after giving birth to my first baby, I had a deadline to meet, which involved painting on a flying piggy in cast iron. 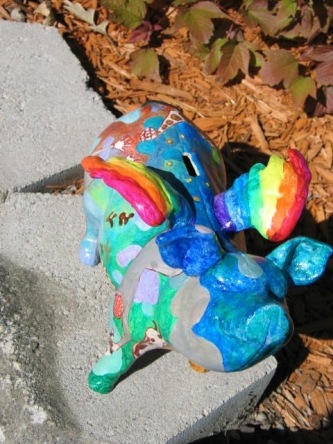 The iron piggy was myself. I had a star to catch and I was living in a world of hideous sea creatures. Nonetheless the reality was that  I was nursing a child during the half of my waking hours and the distinction between night and day became meaningless. I couldn’t have painted this pig without my mom rocking back and fourth a child so I hold a brush instead.

After my mom left, the real challenge had started.

I became a fighter

for my rights, my time, and my own pursuit of happiness.

I typed artist statement and edited my resumé to apply for exhibitions. My research of venus didn’t stop at the boundary of local. Scared of New York, I went to Chicago. During the spring break of my husband’s law school, we blazed through Chicago wind to hit all the galleries that I wanted to check out. A kind woman who was then a owner of a big gallery let me nurse my baby and change diaper in her back office. In hindsight such warm memories were the only gain I had from the Chicago trip.

Two good news came to my email inbox while I was in Geneva, summer 2011: I won two exhibitions opportunities through University of Minnesota and Augsburg college. I begged my husband to take a leave from his law school for one semester so he can be a full time dad. He could not say no. I was too determined.

In September 2010, a week after celebrating our daughter’s first year birthday, I took my bicycle on Green Lane of Minneapolis to go to the Highpoint Center of printmaking. Green Lane is like freeway for bicycles. I worked until lunch, quickly took my salad and worked again until five in the evening. I dared not waste a single minute. Even the weather was on my side. I don’t remember a drop of rain during my bike commute until winter. I finished making twelve copper plates for  Blessings I and had my first prints ready for exhibition at Larson gallery, St. Paul.

(My Journey of Becoming a Mother: Part Two is to be continued…)

Blessings is a collection of artworks and poems that reflect the inner landscape of a woman undergoing an identity shift from an artist to a mother. The six titles of poems represent the phases or stages of  an emotional transformation. The images corresponding to twelve months of the year are rendered in an elemental language of repeating motifs and colour.

2 responses to ‘My Journey of Becoming a Mother, Part One’